About SecuritySystems.Net service: The reviews and information expressed on this site are the opinion of securitysystems.net and are subject to change. To keep this valuable service free, we generate advertising revenue from some of the companies listed on this website.

A straightforward guide on reducing the changes of burglary. 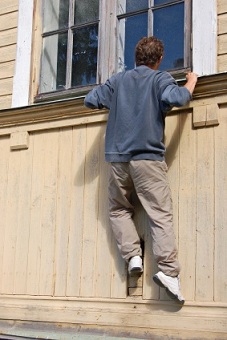 Most burglars are looking for poorly secured properties to steal goods that can quickly be converted to cash.

One of the most devastating experiences anyone can be confronted with is the invasion of the privacy of one's home by an uninvited stranger. All of the sudden, the safety and security of the home have been destroyed. Residential break-ins, maybe better known as burglaries, are taking place in every community in the United States. However, some locations seem to be more vulnerable than others.

Recent FBI statistics show that there are approximately 2,200,000 burglaries annually in the United States. Over 70% of them are residential burglaries. As an example of the wide differences in the burglary rates, North Carolina experienced 1,201 burglaries per 100,000 residents, while New Hampshire had 326 burglaries per 100,000 residents. Further, 85% of the perpetrators are under 25 years of age and male. Most residential burglaries (60%) take place between 6am and 6pm. That is when homes are usually unoccupied as the residents are at work. Seasonal changes also have an impact. During warm weather, windows are often left open, which makes the home a more attractive target. The majority of burglars cannot really be classified as professionals. They are frequently drug addicts or unemployed individuals looking for a quick source of cash, or items that can easily be sold.

What is usually taken from the burglarized home?

The top of the list includes cash, jewelry, guns and electronics. The preferred items are the ones that are easily carried away in a backpack. Larger items, such as personal computers, TVs, etc, are normally left alone. The average monetary loss in a residential burglary is a little over $2,000.

Although it is difficult to profile the typical burglar, especially as less than 14 percent of residential burglaries are solved, my personal experience as a police patrol officer and investigator has given me some clues over the years.

What bothered me was the fact that neighbors sometimes had observed a suspicious person in the area, but did not take any action. In one case the burglar even asked a neighbor what time the occupants of the house would usually be home as he had a delivery for them. The next day he burglarized the house in the early afternoon as he was told that the victims always arrived home after dark. The neighbor never notified the victims of this incident until my investigation. I was involved with a very successful neighborhood watch in our city. We met on a regular basis with the members of the neighborhood watch, exchanged information and received valuable intelligence. This enabled us to both decrease the number of break-ins and other property crimes in the area, and also helped in solving some crimes. Victims of residential burglaries usually expressed anxiety, fear and inability to sleep after their homes had been burglarized.

Both Federal and Local Law enforcement Agencies Recommend the Following

SIMPLE STEPS TO MAKE YOUR HOME LESS ATTRACTIVE TO A BURGLAR:

During my days a patrolling police office, I noticed a lot of people advertising that they are away from home by leaving a note on the front door. Never do that. Only inform trusted neighbors or friends and ask them to keep an eye on your house.

IF YOU COME HOME AND FIND AN OPEN OR BROKEN WINDOW OR DOOR, YOU SHOULD:

YOU SHOULD ALSO DO THE FOLLOWING:

Pete Onni is a Adjunct Faculty Member at the Institute of Police Technology and Management at the University of North Florida as well as Georgia Public Safety Training Center. He has over 30 years in law enforcement and security consulting, including working as a Training Consultant for the US Department of Interior, Office of Insular Affairs.